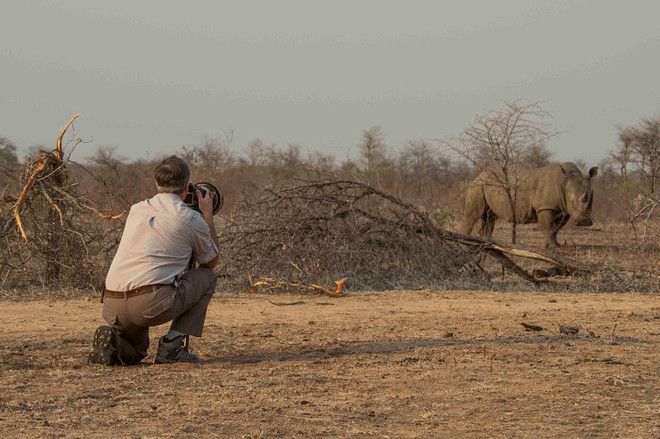 African wildlife photography has been Phil's passion for many years. Phil has been travelling since birth, and by the time he was 21 he had lived in 11 countries, including Zimbabwe (then called Rhodesia). “Africa made an impression on me, like no other. Of all the countries I have lived in, it draws me back; the smell, the taste of the air – I can’t explain it.” The African bush always had an appeal, especially as a small child. “I think my parents were amazed I made it to five years old, let alone 50! I went out to ‘explore’ a bush fire one day. Fortunately I was found wandering amongst the smouldering timbers, covered in soot and was brought back on a fire engine and handed to my mother. My parents put up with a lot. They couldn’t open a matchbox or drawer without wondering what reptile or creature would crawl out. I collected things and stuffed them into anything I could find!”

Phil has been taking photos since getting his first serious camera when he was 15. “I persuaded my headmaster to buy the equipment needed to set up a Dark Room at my school. None of the teachers knew much about photography, so I taught myself.” This was before schools taught a broader range of subjects, as they do now. “The main criteria were to understand the physics of light and optics, the chemistry of developing, and take it from there.”

Always the adventurous sort, in the early 1970s Phil started scuba diving in Oman, before they had any sports diving clubs there. “I applied the same principle I had applied to my photography – I taught myself. I bought an aqualung, read all the books I could, and started diving. With hindsight, not the smartest thing to do!”

Although Phil now concentrates on his wildlife photography, his first career was as a helicopter pilot with the British Army. He learned to fly fixed wing whilst still at school, and went solo before he was legally allowed to drive a car. Later, skydiving became his main hobby. He met his wife whilst instructing on a course teaching experienced skydivers how to link canopies into formations. He qualified as a helicopter instructor and spent much of his military career serving overseas, which included flying special forces in Bosnia. He later became a Regimental Instructor, before retiring from active service. He then continued in the instructor role as a civilian, on the Apache Attack Helicopter. Once he got the flying bug out of his system, he replaced it with classic cars and the thrill of driving them around the UK's race tracks.

African wildlife photography is now his second career, which he is able to combine with his love of Africa. “I love being in the bush. You have to accept whatever it gives you from one day to the next. We've seen some amazing things and if you’re lucky, your camera is with you. If I had to give someone one piece of advice, it would be – always walk out of your door ready to shoot a photo, not when you get to the vehicle for a game drive! I’ve seen some fantastic sights a couple of steps from my door, but had my camera in my bag – I’ve learned from that.”
© Phil Judd
Powered by ZENFOLIO User Agreement
Cancel
Continue